Mod fashion has taken its cues from a variety of sources and searched for inspiration from a myriad of different places. Basically, if it was cool, Mods sought to adapt it and make it their own. Musicians on Jazz albums were copied and actors in French film were imitated. A tennis polo shirt became a Mod icon, a US army parka became a second skin on scooter outings, wearing a cycling shirt became a fashion staple and even bowling shoes were considered perfect for the dance floor.


One undeniable influence was the American Ivy League look. When it comes to looking smart and cool, 60s American university students with their cardigans, merino sweaters, button-down Brooks Brothers shirts and Bass Weejuns penny loafers had mastered the look. Add to that the uniform of the time honored sport of rowing and you have a recipe for some colorful Mod fashion.


Ah… the famous boating blazer. The combination of multi colored stripes, golden buttons, college crest on the breast pocket all make for a rather bold statement when out at a Soul all-nighter. Like many pieces of clothing that became part of the Mod wardrobe, it has seen its share of modifications and adaptations.

For one, most of the Mod boating blazers have 3 buttons when the authentic ones from the 50s and 60s are more than likely to sport two. The contemporary version will see some covered buttons instead of the traditionnal gold ones and the extra ticket pocket on the right hand side makes it all the more Mod.


It is hard to tell at what point the boating blazer simply became a striped jacket but gone are the patch breast pockets with the university crest or the yacht club name on it. The contrast piping often seen on the edge of the lapel has been left to the past decades. But that doesn’t mean that a prime vintage example should lay dormant in a closet!

During the Mod Revival, the boating blazer was still part of the uniforn. No matter where you stand on Quadrophenia's contribution to the resurgence of the Mod mouvement in the 80s and its equivocal  depiction of Mods in the 60s, we can't deny that it influenced many of us. Take this iconic image of Jimmy riding his Lambretta with his cocky attitude wearing a beautiful example of the blazer in question. How many of us wished we had a Leslie Ash holding on to us on the seat behind us? 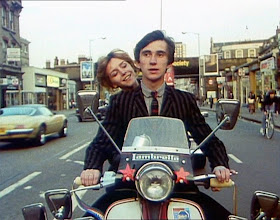 And this photo of Dave (actor Mark Wingett) who made us all wish we could look this suave and stylish. 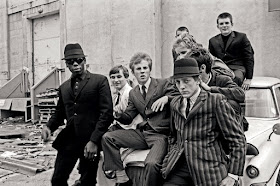 Like many questionable fashion choices made in the 80s, some women (not many that I knew) borrowed from their boyfriend's closet, evident by this catalog ad from Carnaby Street's Mod emporium The Carvern.

Personally, I like boating blazers… a lot. The trick is, pulling off the daring look without passing for a circus ring leader. It is also fair to ask yourself if there is one point in your life when you should simply avoid the look altogether.  Granted, when you hit 40, it’s not a look that is easy to pull off. You don’t always have that college state rowing champion figure that you used to have. Nonetheless, there are a few occasions, when well-coordinated, that you can still look sharp and stand out.


I consider the boating jacket more part of semi-formal wear. I rarely wear mine with a tie but that's the beauty of the boating blazer, you can dress it up a notch by wearing one. I usually substitute the tie for a nice knit polo à la John Smedley, an open button-down shirt, a turtleneck or a plain Fred Perry polo.


The jacket offers a wide range of possibilities of trousers to wear. Neatly pressed pants, chinos or even Levis all go well with it. I like to wear pants that will match one of the colors seen in the jacket. You can go with a lighter shade or a darker one, depending on what you have on hand. White Levis are a favorite of mine. They give the stripes of the jacket the attention they deserve. The same goes for the shoes. Loafers, saddle shoes, top siders, desert boots, Chelsea boots or brogues are all acceptable in my opinion.

Instead of  wearing men's clothing with its rather square lines, today's savy Mod lady can parade in her own striped blazer, the cut being much more flattering to the figure. My wife bought this short jacket from Canadian retailer Tristan & Iseult. The retro influence is undeniable and it looks great with a skirt or part of a more relaxed and casual look with a simple pair of jeans. 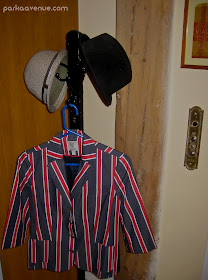 Many Mod friendly retailers like Merc, Fred Perry, Gabicci and Pretty Green have come up with their take on the classic blazer. If budget and big celebrity hyped brand names are not a concern to you then you might want to consider Pretty Green. Does the quality warrent a £450 price tag? That's debatable. I have to admit that my mate Dominic does look quite debonaire in his. 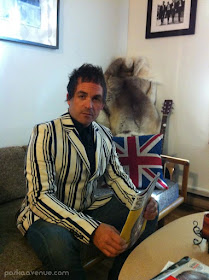 One of my favorite internet one-stop shops is by far Atom Retro. They carry two quality brands that offer the desirable blazer. The first is Gibson of London. The quality is apparent and can rival any of the previously named international renowned brands. This is not the type of garment that will have the seems split while you're doing the shing-a-ling on the dance floor and you don't need to worry about losing buttons in a dark club. 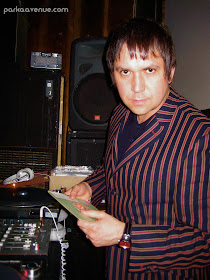 The attention to detail is what sets it apart from the cheap copies you might find in large surface stores. The working cuffs, the covered buttons, the slim lapels and the ticket pocket are all there.

The lastest arrival at Atom Retro is this Madcap England jacket. I've written about UK based Madcap in this post about cycling shirts and in this one about jumpers, so you know I'm partial to the brand. Well, fellow readers, I don't think you'll be disapointed with this one. This 3-button jacket, with the top button really high, sixties style, could have been taken straight off a young Steve Marriott's back. 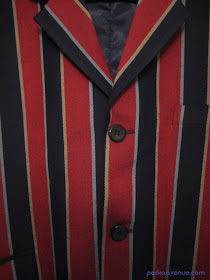 If you never had the opportunity to own one, here’s your chance. The good folks at Atom Retro have provided this Madcap looker as a raffle prize to the Parka Avenue readers. The jacket looked so good that I had to buy one for myself! So I can personally attest to the quality and fit. Trust me, you want this one! 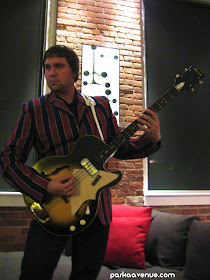 But that’s not all! Two additional prizes of two £20 vouchers at Atom Retro are also up for grabs! The contest will be held until November 1st 2012. You have more than one way you can enter the contest. One, go and like the Parka Avenue Facebook page. If you’re already a member, simply share the Boating Blazer post off the Parka Avenue page.  Follow me on Twitter and you have yet another chance of winning. Already following me on Twitter? Then simply retweet this post or mention the contest and add the #parkaavenue ashtag. Finally, leave a comment below and you’re in!

If you don’t believe that Lady Luck is on your side and you can’t stand the suspense, by all means, visit the good folks at Atom Retro and buy yourself one right now! 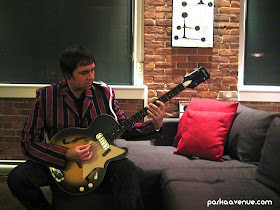